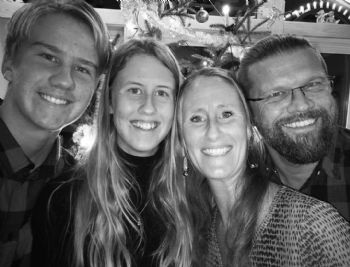 Both Jonas and Anne-Sofie were born in Sweden and had the blessing of being raised in loving Christian homes.  Both felt the call of God on their lives as teenagers, each making personal decisions to be baptized and follow Christ.

The Nystroms met in 1999 when Sofie joined the church team where Jonas was pastoring. They were married in 2002. They have two children, Anna Linnea (17 years old), and Carl Isak (14 years old). The Nystroms value highly the inclusiveness of family in ministry, each member contributing through unique gifts and talents.

Jonas did a year of Bible School before getting into ministry as a youth leader in 1992.  Over the ensuing five years, he participated in missional leadership training in Denmark, and leadership training through Euro Academy in Stockholm, Sweden. He also spent time in youth minister training at Willow Creek (Chicago, USA) as part of an exchange program. From 1998 until 2013 he he was a full-time pastor at Highland Church, Savsjo (Sweden).  The family moved to Hawaii in 2013 where Jonas served as Internship Director at Surfing the Nations and as one of the pastors of Surfers Church in Wahiawa.

In 2016, the Lord directed the Nystroms to make contact with Tommie Naumann and felt God leading them into ministry with refugees in Greece. Since August 2017 they have been living and serving in Greece. Jonas and Anne-Sofie are both gifted teachers and share a passion for introducing others to Jesus. Due to the growing number of refugees being relocated to the northern parts of Europe they are moving back to Sweden in the summer of 2021. This will enable them to support the growing number of believers in the refugee communities in Sweden, Germany, France, Belgium and The Netherlands.

CLICK HERE to Find out more about joining a team visiting our mission.